We came to dinner optimistic that  we might see innovative new dishes using bread – and we were not let down.  Root Down Chef Justin Cucci presented an exceptional gluten free menu with added dimension made possible by Rudi’s Gluten-Free Bakery.  Rudi’s Organic of Boulder, Colorado launched this line of gluten free bread under the new Rudi’s Gluten-Free Bakery brand.

The menu for the evening:

Our Rocky Mtn. Ford Cantaloupe & Tomato Cazpacho soup was served with Rudi’s Gluten-Free Bakery Tomato Jam Grilled Cheese.  What a delicious start to the meal.  This was our first glimpse of the new bread and we were impressed.

The Tomato Jam Grilled Cheese was served on Rudi’s Gluten-Free Bakery Multigrain Bread. The Tomato Jam had the consistency of queso and was partnered with Potato Chip Gouda cheese then cooked in a buttered pan.  The Grilled Cheese didn’t crumble or break even when held with one hand.  The taste of the bread was mild and not too grainy.  The soup and grilled cheese were so good we could have stopped there. 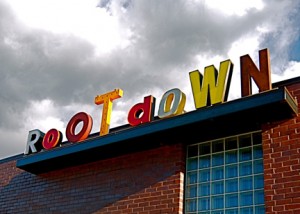 Next came the Small Plate and Entrée.  In sticking to our intention to review bread in this post, we won’t review these plates since they contain no bread.  However, we recommend visiting Root Down to experience their menu.  The Madras Curried Corn & Tempura Asparagus were outstanding as was the Rocky Mtn. “Never Ever” Bistro Beef Tender.  Both gluten free.

Our meal ended with Rudi’s Gluten-Free Bakery Bread Pudding.   We haven’t seen bread pudding offered on a gluten free menu before.  Since we both are weary of soggy bread, we weren’t sure how we would like the bread pudding.

Since the dinner, we brought home a loaf of the Rudi’s Gluten-Free Bakery Multigrain Sandwich Bread.  We’ve enjoyed it during the week for sandwiches and toast although our children are not as fond of the multigrain taste as we are.

On Sunday, in the ultimate test of a great gluten free bread, we made french toast.  In making the french toast, we struggled with dipping the bread in the batter.  The top corner of the slice kept breaking off as I flipped the bread and one piece broke again as I tried to pick it out of the batter.

But again we were happy with the bread in the finished french toast.  The taste and consistency of the bread are outstanding.  We look forward to having bread in our menu in a more meaningful way in the coming months.  We think our children will be happy with the original!

Rudi’s Gluten-Free Bakery have three bread choices available:  Original, Multigrain, and Cinnamon Raisin.  Rudi’s Organic Bakery has distribution in all 50 states so you should see it available soon.  Let us know your opinion of these new breads!

I’m so glad that you were able to join us last week and that you enjoyed the Rudi’s Gluten-Free dinner at Root Down. I absolutely loved the grilled cheese. Although, with my cooking skills, I doubt I will be able to recreate it at home. But that won’t stop me from trying!

Interesting feedback on the corners of the bread slices. Thanks for sharing. I will pass it along to Doug immediately!

Again, so glad you could join us. It was a pleasure meeting you both, and I look forward to seeing you again!

It’s posts like this that keep me coming back and checking this site regularly, thanks for the info!

I love Rudi’s Gluten Free Bread! Finally a bread for the dietary geriatrics that doesn’t taste like chalk and ground up mummies! Now all I want is for them to offer shipping with USPS or UPS because with what they offer now a loaf costs $11.84!

[…] Croft from Lexie’s Kitchen, Peter and Kelli Bronski of No Gluten, No Problem, Karen Shirley of A Happy Gluten Free Website and Megan Bucholz from A Boulder Table, has kept us long-inspired to keep creating gluten-free […]